The netball season is underway and Year 6 have been training hard after school in preparation for the league. In three friendly matches last week, the A team won, lost and drew a game. The B team drew two of their games and lost one game.  This week the teams played their first league games. The A team lost one game and won another, while the B team lost both of their games. Well done to all of the players for some excellent performances so far. 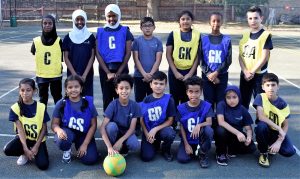