Congratulations to the Year 6 boys football squad who were awarded the Camden Southern League winners’ trophy at Talacre Sports Centre. As winners, the boys competed in The Camden Finals against the top teams in the three Camden leagues.

The combined boys and girls squad also won the Fair Play Trophy for their outstanding sportsmanship throughout the season. Well done to the whole squad for all their efforts in training and in matches. 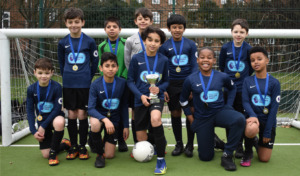