Richard Cobden pupils have been busy this term participating in a range of sports competitions. 40 children from our Key Stage Two Cross-Country team performed brilliantly in the Camden Schools competition at Parliament Hill Fields. All pupils completed the one mile course which included a gruelling up hill run! There were some outstanding performances from several of our runners including: Charlie (7th place in a race of 120 children), Kayode (9th place out of 105) and Mehraan (10th out of 105). Richard Cobden finished in 8th place out of 19 schools, with a total of 1,615 points. Congratulations to the whole team!

Children from Year 4 had a great time at the Camden Schools Sports Association’s bench ball tournament at Talacre Sports Centre.

All pupils performed very well in the competition where they played in teams mixed with different Camden schools. Several of the squad received medals for their outstanding attitude and performances.

The Year 6 Tag Rugby squad played in the Camden School’s competition at Parliament Hill Fields. The B-team won 2, drew 1 and lost 2 of their matches and finished in 5th place overall. The A-team came back to school with the second place trophy. They won 4 matches and were very unlucky to lose their final game 3-2. 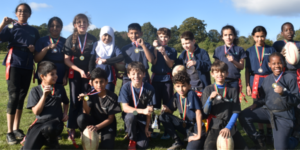 Congratulations to all 16 players!