In the Autumn term, Year 5 entered an art competition with LabTech. The brief was to create a design to reflect the theme Camden: Past, Present, Future, which would be painted on to a life sized statue of a horse. We are very pleased to announce that Year 5 won the competition!

Anna Majid and Adam Sharaf wowed the judges with their designs which were carefully reviewed by the panel consisting of Camden Council, local community representatives and LabTech team. The panel said that they were ‘impressed by the high standard demonstrated by the pupils reflecting their creativity, innovation, technical abilities, and the talent to execute the designs were outstanding.  The winning design concept embraces the essence of people’s diversity, inclusivity, and the freedom of expression.  The colours are vibrant and bold, reflecting Camden Market’s rebellious artistic creativity.’ The designs were recreated in sculpture form by Captain Kris and Sugar For My Soul. An exhibition in Camden market showcased and celebrated all of the work entered as part of the competition. 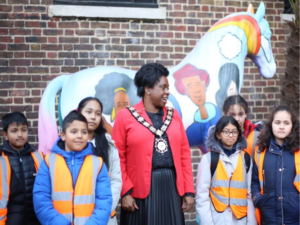 Year 5 were invited to attend the ceremony where the Mayor of  Camden officially unveiled the horse and  presented the children with a cheque for £1000. 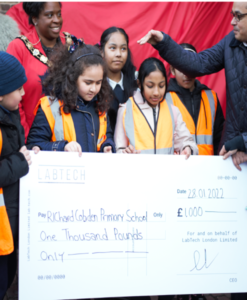